The Alpujarras is a mountainous district in Southern Spain, which stretches south from the Sierra Nevada mountains near Granada to the province of Granada and the eastern part lies in the province of Almería. The trip we show you today guides us to Trévelez, the highest village in Spain, 1476 m. Starting and ending in […] 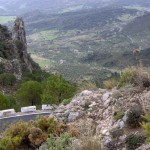 This is a one day tour through the Guadalhorce valley, Sierra de las Nieves, Serranía de Ronda and Sierra de Grazalema, located between Málaga and the province of Cádiz in Spain. 261km of curves through an unique contiuously changing landscape of mountain passes and forests. We leave Málaga towards Coín and Alozaina where we find […]